Tribal Football is a popular global football news website with a huge audience, averaging 5 million readers a month and over 180 million pageviews a year.

Tribal Football approached us a little over 2 years ago with a website that was clearly struggling to keep up with the demands of a changing audience, high mobile usage, and contemporary browsing habits. The site design was very dated and offered a poor user experience, and the supporting technology platform was very out of date and non-performant, which meant the site often crashed under load for hours at a time. Here are a few key stats:

With the above in mind, we knew we had a big challenge on our hands, so we planned our attack on the project carefully and worked in partnership with Tribal to realise gains early before embarking on a major rebuild.

The first phase in our engagement was actually strategic; we stepped in to rectify the worst issues, improve page load times, and stabilise the infrastructure to prevent it from crashing constantly. This was achieved in three main areas:

Analysing and identifying which parts of the application caused high page weight or server load, and either optimising or removing them.

Migrating from a bare-metal and poorly architected platform to a fully load-balanced, auto-scaling solution through AWS, utilising EC2 instances, RDS, and S3 asset storage. Additional to this we implemented a Varnish caching layer to turbocharge page serving, and Cloudflare to act as our global CDN.

UX enhancements to look and feel

We identified some major issues with UX in parts of the site, and implemented some 'quick wins' that immediately improved the user experience and made the site easier to use.

Once we had stabilised the site we were then able to re-monetise the property with our strategy team by implementing carefully placed ad units, situated to achieve a balance between revenue and user experience.

We also implemented native advertising units on article pages using Outbrain, and together with our yield optimisation partners Rubicon Project we were altogether able to increase revenue by over 100%.

Before redesigning the site it was important to gain reader feedback. Using embedded user surveying tools and other measures to collate user feedback we gathered a range of insights which informed our design process.

During the process we immersed ourselves in football and learnt everything we could about the world game along the way we've become intimately familiar with great clubs and players, culture history (and some of us have guns at fifa on xbox as well!).

One important learning that became apparent is that readers are passionate about their favourite club, but they often have a "second" club, or additional clubs from several other leagues also.

With this knowledge we redeveloped the architecture of the site and user journeys around a "home" for their club, with a hub page that aggregates news, players, and social media for that club, whilst still facilitating "quick switching" between both leagues and also other clubs in that league. With the new website architecture in mind, the refreshed identity also builds on the idea of club allegiance and utilises strong ‘warpaint’ stripes to create a bold masculine graphic. We also developed a key personalisation feature called "My Tribe". My Tribe allows you to select your favourite clubs and leagues and essentially personalise your Tribal experience, creating your own news feed with selected content. We utilised LoginRadius as an SSO (social sign on) provider, with the awareness that a dominant percentage of users prefer SSO to traditional signup methods. 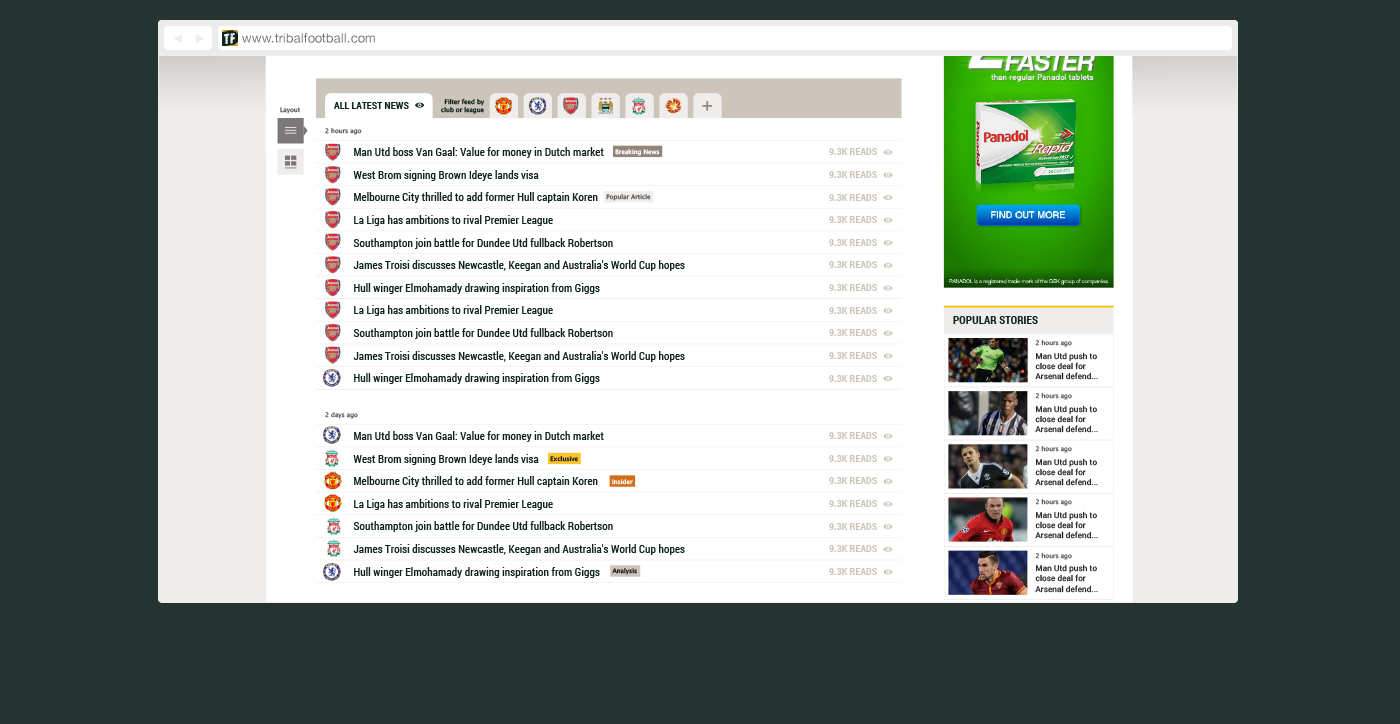 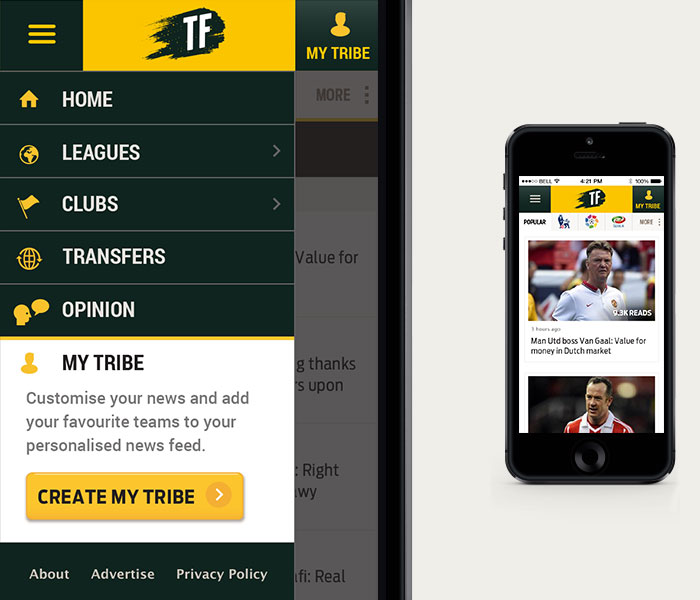 The new site had to perform equally well on all devices, as from our research we knew that mobile was fast becoming the dominant mode of accessing tribal content. We had a challenge to present over 500,000 articles from over 300 clubs in a clear and concise manner that was elegant and intuitive to use on everything from mobile to desktop. 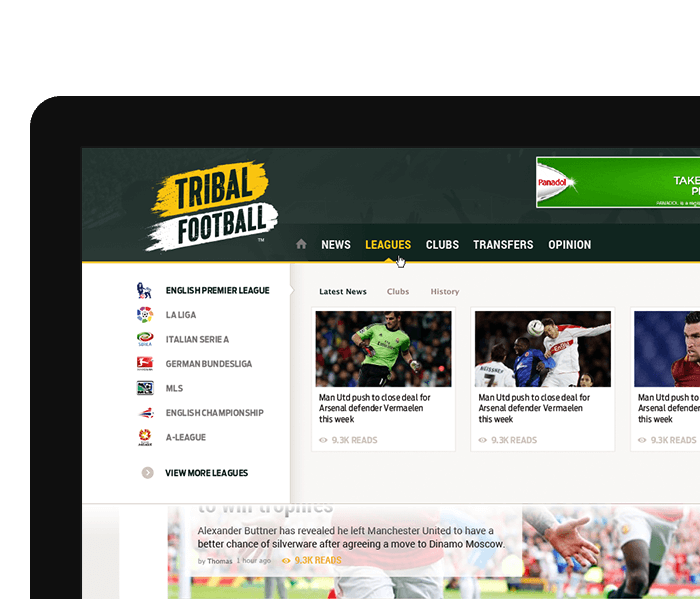 The navigation gave quick access to popular leagues and clubs to drive users into articles quicker.

Phase 2 of the project was rebuilt on a tech stack comprising an n-tier Symfony API & application (with a little Go thrown in), using Amazon RDS as our database server (Multi-AZ), Nginx, and Varnish as our server-side caching layer.

Cloudflare was retained as a global CDN along with its handy suite of other tools for improving page speed and enhancing security. The site runs on load-balanced, auto-scaling AWS infrastructure which will automatically provision and destroy server instances as needed under load, drastically reducing server costs and administration time.

Tribal Football now has a best of breed, revitalised presence as a global player in football news, with a slick website providing a comprehensive wealth of news, personalised content and more on a cutting edge auto-scaling platform built for growth. Get in touch , we'd love to hear from you